We at Gold Man Review are not idolators. Yes, I know he is gold, and yes, he does have a rough but smooth beard that is untouchable yet alluring at the same time; and yes, he does remind me that I have to pick up some paper towels on the way home from work. But no, this does not make us idolators. Even though it would be an awesome trophy to keep in the backyard, so that I could put a fez on his golden locks when the cherry blossoms begin to flutter on a breeze. And on windy days I could strap an elastic string under his rugged jaw and tilt a propeller hat just right above his golden ears. But then again, that golden shimmer off his stomach in the morning could be a rude awakening...

No, we're not idolators, and, it would obviously be too much of a hassle to keep him as a trophy. So, instead, he is a golden beacon: an emblem for exploration, intelligence, and determination. He's our mascot. Why not? All that glitters is gold; and sometimes, as I look around, I can still see the afterimages from when his shining luster caught my gaze that one bright morning. And that's when I decided to not roll over and fall back asleep, but to awake and weave a dream in honor of that man.

Cheers!
Posted by Gold Man Review at 3:06 PM No comments:

The Moth is coming to Portland

If you'd like to submit your work to Gold Man, please review the submission guidelines at www.goldmanpublishing.com and submit to http://goldmanpublishing.submishmash.com/submit.
Posted by Gold Man Review at 6:05 PM No comments:

The Hallie Ford Literary Series at Willamette University is open to the public, in the Hatfield library on campus, so check out some of the following speakers:

Hallie Ford Literary Series, Spring 2012
Thursday, February 2: Susan Briante, Poet
Susan Briante was born in Newark, N.J., after the riots. She is the author of two poetry collections, most recently UTOPIA MINUS. She also publishes essays on industrial ruins, abandoned buildings and cultural memory. The poems in her first book,  Pioneers in the Study of Motion (Ashanta Press, Boise State University, March 2007) reference field notes as well as love letters as they trace her experiences living in Mexico City from 1992-1998 and reading the Latin American avant-garde. About Utopia Minus, the poet Jean Valentine writes, “What a wildly intelligent, learned poet Briante is, in this biography-autobiography of the American body and soul around 2010, witnessed (and lived) with such bite, understanding, and sorrow.”
Monday, March 5: Anthony Doerr, Fiction Writer
Winner of The Story Prize, the country’s most prestigious award for a collection of short fiction, Anthony Doerr is the author of four books, including the memoir Four Seasons in Rome, the novel About Grace, and the story collection The Shell Collector. His most recent book, Memory Wall, a second volume of stories, was named a best book of the year by the New York Times, the Boston Globe, the San Francisco Chronicle, and Amazon.com. Doerr’s short fiction has won three O. Henry Prizes and has been anthologized in The Best American Short Stories, The Anchor Book of New American Short Stories, and The Scribner Anthology of Contemporary Fiction. He has won the Barnes & Noble Discover Prize, the Rome Prize, the New York Public Library’s Young Lions Fiction Award, a Guggenheim Fellowship, an NEA Fellowship, the National Magazine Award for Fiction, two Pushcart Prizes, the Pacific Northwest Book Award, two Ohioana Book Awards, and the Sunday Times EFG Short Story Award. He teaches in the MFA Program for Writers at Warren Wilson College.
Wednesday, April 4: Oregon Book Awards Author Tour
In partnership with Literary Arts, Inc., of Portland, the Hallie Ford Chair and English Department will host a reading by three finalists for this year’s Oregon Book Award. The Oregon Book Awards are presented annually for the finest accomplishments by Oregon writers working in various genres, including fiction, poetry, literary nonfiction, and young adult literature. Finalists will be announced in January.
Plus, a special event:
Monday, April 30 / Tuesday, May 1: New Literary Works Festival
This two-evening program will celebrate the written word with a combination of dramatic readings of student plays and readings of poetry and prose by students in the Senior Seminar in Creative Writing.
Posted by Gold Man Review at 12:27 PM No comments: 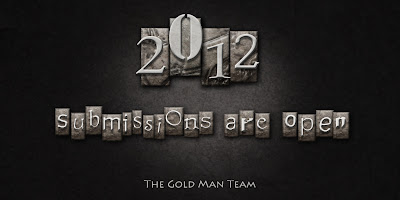 Posted by Gold Man Review at 11:16 AM No comments: